From time to time, I receive a call or an email from someone asking me what's going on with the electricity bill.

Normally the client think that the electrical company is charging him much more that it could be expected for an apartment that is not in use. For that reason I was looking some information in order to explain in simple words what's going on in the Spanish electrical business: 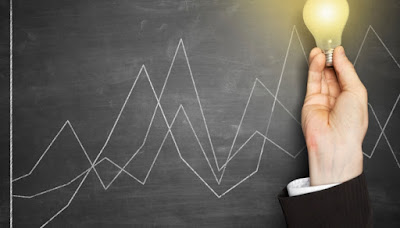 Spain’s electricity bills are among the highest in Europe, having risen 70 percent between 2006 and 2014.

The rate deficit is the difference between the real cost of power production, distribution and delivery and the price paid by consumers through their electricity bill, which is less, and consequently, does not cover that real cost. Through a Government decision, this difference is paid for “in instalments” and is reflected in the electricity bills of following years, with their price, therefore, increasing.

Currently, payment is still outstanding on a deficit of 26 million euros accumulated over preceding years. In 2013, an additional deficit has been generated to date in the amount of almost 4.5 million euros, although the Government hopes that once all of the year’s costs and revenues have been accounted for, this figure will decrease to just 3.6 million. The Government has adopted different measures in order to correct the disparity by sharing the burden among electricity firms, special regime producers (solar, wind, etc.,) and consumers.

The higher the accumulated deficit, the higher this amount is. In 2013, it has meant almost 3 million euros, which represents more than €5 out of every €100 paid by domestic customers on their bill.

The bill also shows other costs not directly related to the provision of electricity: direct and indirect taxes, subsidies and payment of the rate deficit.

Which taxes are included in the electricity bill?

Currently two types of taxes are paid directly on your electricity bill. On one hand, VAT, which for electricity is set at the maximum rate of 21%. On the other hand, the Electricity Tax, used to finance the Autonomous Communities.

The sum total of all these taxes represents 29% of the electricity bill, which is much more than the standard 21% VAT.

What are the subsidies for renewable energies?

Subsidies for renewable energies represent more than €18 out of every €100 paid on the electricity bill.

However, the increases in taxes and other charges not directly related to the electricity supply (such as subsidies for renewables, payment of the accumulated deficit, or taxes included in the electricity bill), have increased by 189% since 2005. 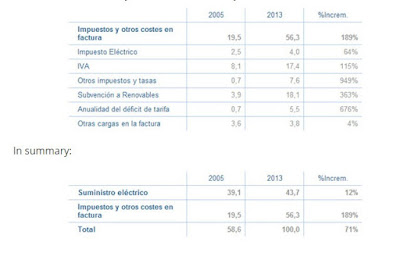 Following two price rises in August and October of 2013, generated by the energy auction lobby, electricity companies announced just before Christmas of that year that prices would go up a further 11 percent in January 2014; in the face of the outcry that followed, the government intervened, preventing the increase.

But how does the energy auction work?

The energy auction called CESUR it was run by OMIE (the Operator of the Iberian Energy Market - Spanish Pole) and is supervised by the National Markets and Competition Commission (CNMC).
This auction was held every three months, and its price was used to establish the tariff that consumers with the last resort tariff will pay. At this auction, the buyers are last resort traders, and the sellers are financial institutions, or national as well as international companies involved in electricity generation or trading.
Several weeks before the auction, the last resort traders give the CNMC their forecasts of their customers’ consumption for the following quarter. The CNMC analyses this information together with the Ministry of Industry, deciding how much energy will be bought at the auction, and publishing a Resolution convening the auction and stating the date of the auction and the amount of energy intended for purchase.
Companies interested in participating as sellers must be previously accredited by the auction Administrator (OMIE).
The Administrator establishes the starting price, and sellers bid for the amount that they are prepared to sell at that price. The total sum of these bids (energy offered) is greater than the energy auctioned (intended for purchase). At this point, a series of rounds begin at which first the Administrator reduces the price, and then the sellers adjust their bids downwards (reduce the amount of energy that they offer). At the end of each round, the Administrator compares the energy offered with that intended for sale, and if there is still a surplus on offer, a new round begins.

It was suspected that the different actors in the electrical pool, were fixing prices around a 30% above the real price of generating that electricity, and when the people figure out that, the government decide to change the rules.

OK, I can see where they are going, but where we are now?:

After a year of study an as stipulated in the new regulations of the Government, as of July 1, 2015 until October 1, 2015, it starts the new method of billing electricity for hours, whereby power companies to bill customers based on consumption of light make every hour to check prices applying at the time the energy market.

Billing by the hour you pay a different price for what you use each time. These prices are published daily by Red Eléctrica de Spain (REE). That is, REE daily publishes on its website - www.ree.es - from 20:15 hours, prices of energy for hours the next day. Even you will see the prices of previous days.

According to consumer rights organization Facua, the cost of electricity per kWh consumed has increased 5.8%, while the price of the kW of power contracted has remained the same since February 2014 (the date on which it went up 17.9%).

On a month-upon-month basis, the average person’s electricity bill, which was approximately 76,10 euro in April 2015, dropped 2.1% the following month. The kW has remained at the same price as mentioned previously, and the kWh fell 2.8% in May in comparison to the previous month.

Facua has asked the Government to step in and ensure that electricity prices are fixed at their real cost and that the consumer is no longer subjected to price hikes whenever the electricity companies feel like implementing them.

The organization has also called for electricity companies to stick to the EU Court of Justice regulations that stipulate that consumers should be informed of any price increases before they are actually enforced – something that does not happen in Spain. 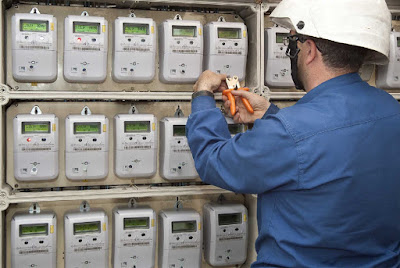 So, as you can see, there is not a simple explanation, but you can clearly figure out a few things about this situation:

A) Even if you have your property with the electricity off, you will receive a bill that will be up to the 60% of the one you receive if you are there. This costs are for pay taxes and other costs and not for consume.

B) If you only let your fridge plug you are going to pay around the 30% of the average consume, as it is one of the appliances that more electricity needs.

C) The system change, so its difficult to compare last year numbers with the actual ones.

D) The higher your power contract is, more are you going to pay in fix costs. 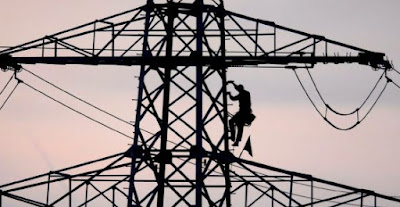 Some links (in Spanish) with information about this (you can use google translator):

http://goo.gl/jX7GxM
The electricity bill will rise by between 7% and 10% in the first quarter

http://goo.gl/XYdB1i
The collapse of a perverse auction

I promise I will come back with more nice stuff about Estepona, but I think Its also good for you to know this information.

Don't forget to visit our web page www.vrhomeservices.com and subscribe to our newsletter!!